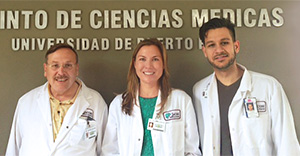 Proud to be part of the Global Health Program!

While many people think of Puerto Rico as a vacation hotspot, lounging on the island’s beaches was the last thing on the minds of second-year students Stacey Frisch, Parth Patel and Helena Wu when they visited the “Island of Enchantment” this summer.

The three were the first Einstein students to participate in a new global health program offered in conjunction with the burn service at Jacobi Medical Center, an Einstein clinical affiliate.

During the one-month program, the students rotated through Jacobi, learning about burn care, wound healing and principles of reconstructive surgery. The program also included taking part in a one-week mission to the University of Puerto Rico (UPR) School of Medicine and the Hospital de Trauma de Puerto Rico, tapping into an existing partnership between Jacobi and UPR through which the medical school’s surgical residents receive training in burn surgery and critical care.

Expanding on a Special Partnership

Each year, more than 80 Einstein students gain real-world clinical and research experience through global health fellowships in more than a dozen sites, such as Uganda, Guatemala, Vietnam and India, according to Jill Raufman, director of the fellowship program and program manager of Einstein’s Global Health Center. But the collaboration with the UPR was the first global health initiative in which participants didn’t leave the United States.

This new program is also Einstein’s first to combine the Global Health Center and surgery. Indeed, that was among the reasons for its creation, noted Dr. Ralph Liebling, associate professor of clinical surgery, in the division of plastic and reconstructive surgery, and director of that specialty at Jacobi.

Dr. Liebling said he’d had little exposure to global health before attending an Einstein global health symposium in 2012. The experience sparked his interest in whether a world-encompassing perspective would be useful in the surgical training he oversees.

He discussed the idea with Dr. Yoel Rojas, then senior fellow in burn surgery at Jacobi and a graduate of the UPR medical school. Backed by Dr. Bruce Greenstein, associate professor of clinical surgery, in the division of plastic and reconstructive surgery, and director of the Stanley M. Levenson, M.D. Burn Intensive Care Unit at Jacobi, and Dr. Nicole Nemeth, an attending at Jacobi in plastic and reconstructive surgery, Drs. Liebling and Rojas approached Ms. Raufman with their idea.

“We decided to support the project because we felt it offered a great opportunity to do work in a new area of medicine not previously available to students involved in our global health programs,” explained Ms. Raufman, referencing the microgrant awarded to Drs. Liebling and Rojas. “Doing the pilot in the U.S., with a known entity like UPR, made good sense since it removed a lot of obstacles and assured that needed resources would be available to explore the viability of expanding the program in the future, to a developing nation.”

The UPR “seemed like a natural fit,” agreed Dr. Liebling. Jacobi already trains UPR surgical residents, so a formal inter-institutional agreement was already in place. Plus, faculty members were familiar with one another and the UPR has a highly trained staff, advanced equipment, and other resources.

He added, “It was wonderful to have the opportunity to work with colleagues we knew but, in many instances, had not yet met. We were treated like family, not guests, and enjoyed the camaraderie and warmth of our hosts.”

A Unique Opportunity for Hands-on Experience

For the Einstein students who took part in the pilot project, the training was, literally, hands-on: They participated in surgical procedures and helped evaluate patients on the ward and in the clinic. It provided an atypical opportunity for students who had completed only one year of their medical education.

One of the students, Ms. Wu, admitted that the experience of scrubbing in and handling instruments was new to her at first. But under the mentorship of Einstein surgical faculty at Jacobi and in Puerto Rico, she soon got the hang of it.

Those mentors guided the students at just the right pace, challenging them–but not overdoing it.

“The people we worked with understood we didn’t have the same knowledge base of more advanced students. They knew exactly what we didn’t know,” said Mr. Patel who, with his classmates,and under the direct supervision of surgical attending physicians, observed and assisted in a variety of procedures that included release of contractures of the upper extremities, trunk and lips, skin grafting and local tissue rearrangement.

Learning About More than Just Surgery

While Ms. Frisch was not a newcomer to the operating room, having spent a gap year after graduation from Brandeis University interning in plastic surgery, working with the burn program opened her eyes to new aspects of the discipline.

“There were so many types of surgery I had never seen, that I knew nothing of,” she recalled. “I was amazed.”

The experience also gave her a valuable perspective relevant to her interest in global health. “This program was different, because even though we weren’t in a developing country, it gave me an experience that was different from New York City,” she said.

That experience has taught her to “be aware of other cultures, to be respectful, and to realize that all patients, wherever they are, share some similar underlying emotions.”

Piloting the program with UPR also helped address an unmet need for Einstein and Jacobi’s hosts: the Hospital de Trauma de Puerto Rico, a UPR affiliate and the major public hospital on the island, had limited resources for burn care. While it was available, the hospital had no dedicated burn intensive care unit and related infrastructure. There was little integration of care for burn patients, including rehabilitation, social work, discharge planning and long-term follow-up.

With the microgrant they received from Einstein’s Global Health Center, Drs. Liebling and Rojas could begin working with their Caribbean colleagues to create a program that would benefit students, trainees and faculty, north and south.

“We seized the moment, and although we’ve only begun our entrance into global health through this special U.S.-based pilot project, we think it was a successful one,” Dr. Liebling said. Apparently others do, too: At the reconstructive plastic surgery workshop held during the week in Puerto Rico, and designated as the first Einstein/Jacobi -UPR Burn Week Symposium, nearly 100 UPR medical students and surgical residents attended. The entire UPR department of surgery—faculty, residents and students—participated in grand rounds that included instructive presentations on burn care.

“Being able to assess our training program with known partners was tremendously helpful, especially since we had a limited window of time for our travels,” added Dr. Liebling. “We plan to evaluate what worked well and how we can replicate our success in developing nations.”

For Ms. Frisch, Ms. Wu, and Mr. Patel, the biggest testament to the program’s success is not a matter of numbers.

“The program definitely showed me what surgery is about, and that will be useful later on in my education. But the program did more than that,” said Mr. Patel. “It demonstrated the differences there can be in approaches to care. I saw how in sharing what we know, we also can gain insights and ideas from our partners.”

Copyright © 2021 | All Rights Reserved
Created and powered by Gateserver